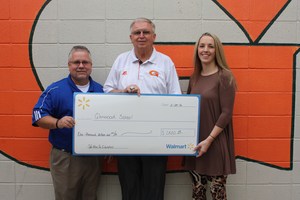 The Opelika Transportation office has chosen Glenwood School to receive a $1,000 donation as part of Wal-mart’s commitment to education.

Smiths Station, Al, November 9, 2016 – The Opelika Transportation office has chosen Glenwood School to receive a $1,000 donation as part of Wal-mart’s commitment to education. Private Fleet truck drivers for Wal-mart – already among the safest drivers in the country – drove extra carefully during the week from August 9 through August 15, 2016. For every accident-free mile they drove during that week, the Wal-mart Foundation made a financial contribution to local schools.

“This is just one of the many ways Wal-mart supports education across the country,” said Keith Windham, General Transportation Manager at the Opelika Walmart distribution center. “It’s also a great way to engage all of our drivers in raising money for our local schools. This program serves as a great reminder to each of us that children are returning to classes and all drivers need to watch carefully for school buses and school children.”

Wal-mart’s Private Fleet is one of the largest in the United States and its more than 11,000 associates, including 7,400 drivers, support more than 4,400 Wal-mart and Sam’s Club locations in the U.S..

About Philanthropy at Walmart

Walmart and the Walmart Foundation are proud to support initiatives that are helping people live better around the globe. In May 2010, Walmart and its Foundation made a historic pledge of $2 billion through 2015 to fight hunger in the U.S. The Walmart Foundation also supports education, workforce development, environmental sustainability, and health and wellness initiatives. To learn more, visit www.walmartfoundation.org.